On 7 December 2014, the Royal Thai Honorary Consulate-General in Reykjavik in cooperation with the Thai community in Iceland held a candle-lighting ceremony to commemorate the auspicious occasion of His Majesty King Bhumibol Adulayadej‘s 87th Birthday Anniversary at Reykjavik City Hall. The ceremony was presided over by Ms. Morakot Janemathukorn, Minister Counsellor, Royal Thai Embassy in Copenhagen who was joined by Ms.Anna Ólafsdóttir, Thai Honorary Consul-General in Reykjavik, as well as Thai residents in Iceland and their families consisting of around 150 – 200 persons.

While some foreigners may understand well the reasons for the love and reverence that the Thai people have for their King, those who are less familiar with Thailand had the opportunity to learn why from the speech of the Honorary Consul-General and information provided by the master of ceremonies.

During his 68-year reign, His Majesty has worked tirelessly to improve the well-being of the Thai people and has contributed to national advancement in public health, education, agricultural research, irrigation and environmental protection, amongst others. His Majesty’s achievements have been recognized both in Thailand and internationally including by the UN. For example, His Majesty was honoured with the first ever UNDP Human Lifetime Achievement Award in 2006 for his efforts to help the poorest and most vulnerable people in Thailand. 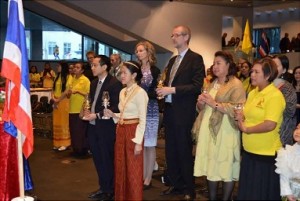 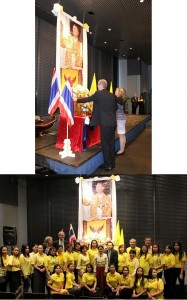