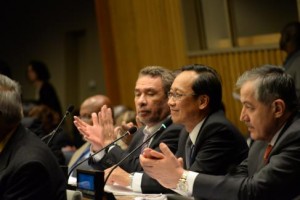 At the 39th Annual Meeting of the Ministers for Foreign Affairs of the Group of 77 developing nations (G77) on 24 September 2015, H.E. Mr. Apichart Chinawanno, Special Envoy of the Minister of Foreign Affairs of Thailand, delivered a statement expressing his gratitude to the G77 members for the endorsement of Thailand’s Chairmanship of the G77 for the year 2016.  This reflects trust and confidence in Thailand within the international arena, as well as demonstrating Thailand’s readiness and leading role in continuing its responsibility in promoting cooperation among developing countries.

Mr. Chinawanno stated that, as Chairman of the G77 in the upcoming year, Thailand is committed to promoting a more participative and democratic world economy, and  pursuing the needs and aspirations of developing countries. Moreover, Thailand stands ready to serve as a bridge-builder among the G77 members, and in the relationship of the group with the other members states of the United Nations.

Thailand is one of the founding members of the G77, which was established on 15th June 1964 by 77 developing countries. Currently, the group has grown to 134 members, but still preserves the name “G77” due to its historical significance. G77 is the largest inter-governmental organization of developing countries in the UN. It serves as a platform for developing countries to build up their economic cooperation and development. It also contributes to the progress of the South-South cooperation.